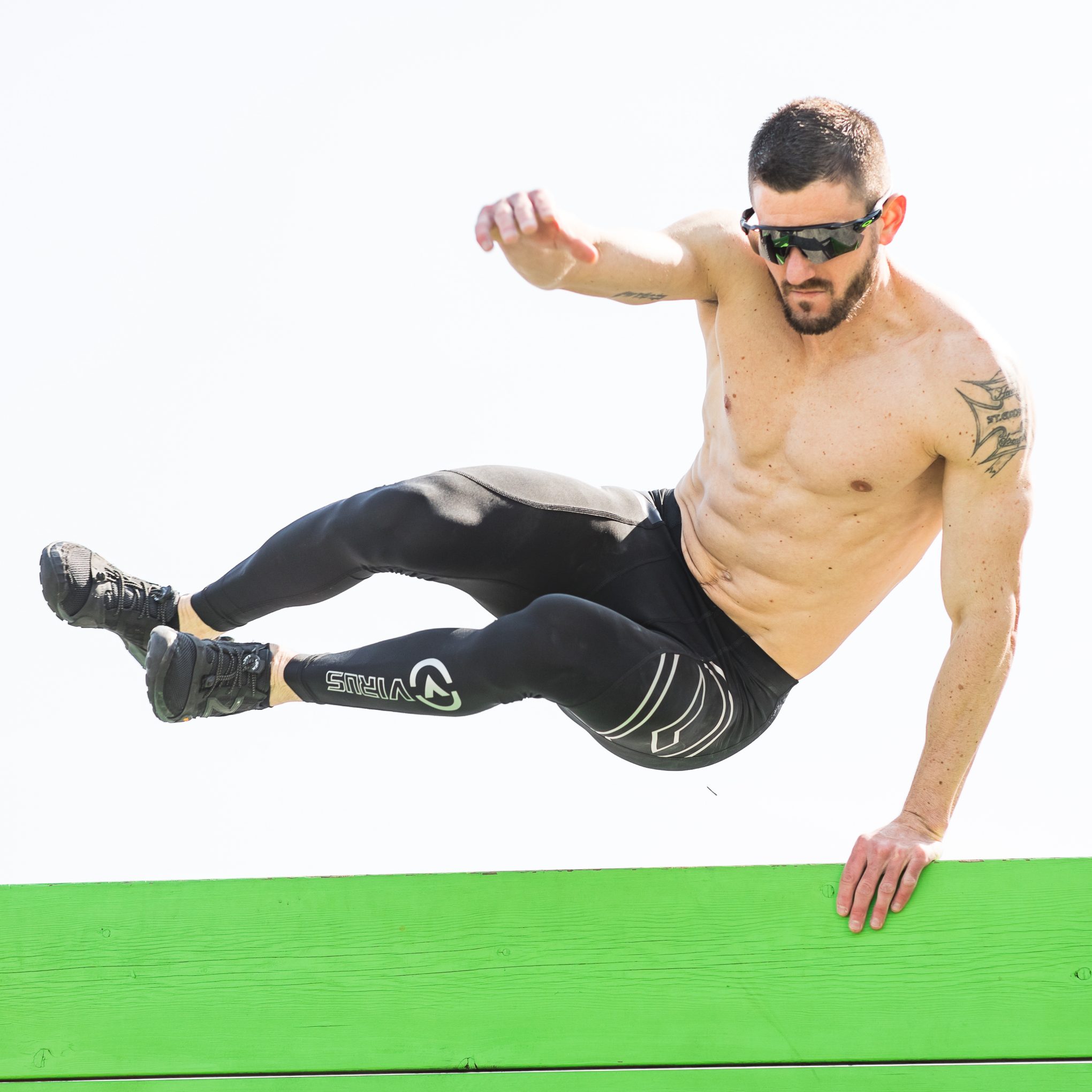 This user has not added any information to their profile yet.

Mike St. George “Honeybadger” is a licensed Doctor of Physical Therapy. He works for Excel Physical Therapy and Fitness, which is a physical therapist, owned private practice based out of Philadelphia and the surrounding suburbs. His setting is outpatient orthopedics and sports medicine.

He graduated from the University of the Sciences in Philadelphia in 2010. Since physical therapists have their doctorate degrees, it provides them with the opportunity to also have a direct access license. This allows them to treat individuals without a physician referral for a window of time helping to facilitate faster access towards addressing musculoskeletal and movement based issues.

Mike became involved in OCR starting in 2014. Finishing his education and earning his degree, he wanted to search for something challenging and competitive to get back into now that school was finished. Mike comes from a competitive running background in high school, competing at state level races for New Jersey.

Mike currently works to balance training and working full time with both passions of fitness and working to help others. You can catch Mike crushing fitness challenges with his team at iCorefitness. He also can be reached on social media for any questions or advice regarding injury, rehab and fitness.

The story of his journey with OCR and how he received the nickname “Honeybadger” can be read below.

Mike is convinced he gets his running genetics from his grandfather. For the early 1900’s, Mikes grandfather was an excellent cross-country runner, bringing back many medals and wins. In high school, Mike managed to place varsity his freshman year in cross-country. He did the same during Winter track and Spring track with times in the 5k from low 17 minutes on technical terrain to mid to low 16 minutes on flat terrain. He was a 4:40 miler as a freshman and a 4:30 miler the rest of his career. He also extended into the 800 meter and was on the 4x800 team running a 2:01 as his best. He hated the 2-mile and only ran it because his coach made him do it sometimes, managing to complete a best of a 10:09 with fair effort. Mike was on pace for potential scholarship opportunities to college during his senior year.

The fun ride came to a crashing halt one night after a cross-country practice in the Fall of 2003. He came home feeling sick with signs and symptoms of a horrible autoimmune disease. After an ER visit and specialist visits, the diagnosis was determined and medicinal management was the course of action. This kept things in remission all throughout college and the occasional flare-ups were treated with steroids. The diagnosis made the decision to give up on a running career and pursue academics easier on Mike’s part considering the circumstances at the time. Being sick took a huge toll on his senior year performance. Losing the opportunity for scholarships, Mike solely focused his college career on his studies, pursuing a Doctorate in Physical Therapy.

The college experience was great for the most part but 6 months after graduation, things took a horrible turn for the worse. The medicine wasn’t working anymore, other treatments were failing and the only response was high, eventually lethal doses of steroids. Multiple hospitalizations, thousands of dollars in medical bills and tons of emotional and physical turmoil later, corrective surgery was the only option.

During the time of being sick, OCR and Spartan Race first started to erupt and become popular. Mike was spending most of his time lying in hospital beds dreaming of the day that he would finally be healthy again and hopefully be able to try one of these races. Throughout this crazy ride he still managed to maintain interest in the sport and FINALLY, after successful surgery, 2014 was the first healthy year and return to a normal lifestyle.

The rehabilitation process to finally achieve feeling “alive” again was long and hard fought. It wasn’t until in the Fall of 2014, that he ran his first Spartan Race. Unfortunately in 2015 and 2016 there were some relapses, one requiring surgery, which started another cycle of rehab and regaining fitness. Ironically this journey of tackling life’s obstacles is synonymous with the sport of OCR.

Currently, Mike is doing very well. Racing more frequently in 2016 exposed him to the race scene and allowed him to obtain experience in the growing sport. 2017-2018 time frames were a transition period towards becoming the strongest, fastest and happiest Mike has ever been. 2018 was not a heavy race year though, but a very successful one. His schedule was limited due to getting married in August to his beautiful, supportive and energetic wife Oriana.
The training at his OCR gym, iCorefitness combined with YancyCamp, has allowed him to reach personal goals he never thought possible.

"I am a firm believer of enjoying each day for what it is. Don’t rush the time otherwise life will pass you by. When you’re given a second chance at life, you have a different outlook on everyday things. I enjoy making people smile because it is a feeling that people never forget. There is a lot of negativity in the world so countering it with positivity is important."

"My co-workers named me the “Honeybadger” as my spirit animal due to my attitude of not caring about the petty stuff, taking on big challenges and never backing down from adversity. I have chosen to accept this role as I hope my attitude resonates throughout my gym and clinic. I hope to inspire my teammates and patients to be the best versions of themselves."

The Man Who Trains the Pros- Chris Knott
@dunamisarp
Listen to Chris who works with professional athletes in the NFL on training, rehab, mindset and how everyone is vulnerable to injuries. Proper awareness, education and mindset is key towards a long, healthy career with athletics and performance.

Listen to Dr. Jordan Shallow (@the_muscle_doc) who is a chiropractor and a competitive powerlifter talk about getting movement right! He treats 9-5 weekend warriors to world-class athletes and understanding the individual as well as the subsequent demand of each of their life styles is the cornerstone on which his practice is built.
Listen to him talk about research clickbait, being careful of what you see on social media and evidence based research vs. eye candy promotions. He also sheds great light on how society needs to take ownership for their own healthcare and wellness!

Listen to Jen Esquer @docjenfit on understanding the human body, emotional relations to physical deficits such as breathing dysfunction and tension in relation to lifestyle stressors. Listen to what good physical therapy consists of and what it takes to fully understand your patient.

My company website. Learn about how and where to get skilled physical therapy with one on one treatment in the greater Eastern Pennsylvania region.
Learn about our therapists, including myself, and the education, skills and specialities we offer.

The greatest supplement company out there for all athletes.
Natural and pure, tested and research backed ingredients in all products.
@endurelite

My first obstacle race was the stadium sprint in Philadelphia in 2014. I ran it with my close buddy Mark who owns iCorefitness where I had started training. I ran the open wave because I didn’t know what to expect and he ran it again with me after he ran elite. It was fun in that some things I did great at and some things completely destroyed me. I had no idea how to train for these races. It was an eye opener. I decided to do the race because I wanted to get involved in some type of competition following graduating college. I wanted to do something other than just running that was still challenging. I thought the concept of engaging in obstacles was fun so I thought Spartan Race would be perfect.

Having to overcome serious medical issues in the past has made me very fortunate to be healthy and alive with the ability to even do this. Many people do not have such fortune. When you don’t have your health and everyday is in question, you tend to view the world differently once given a second chance. The terms “hump day” and “TGIF” do not exist in my vocabulary. I enjoy everyday as a new opportunity. My coach Yancy said, “You spend 98% of your life training and 2% of your life competing. Enjoy the 98% ride, for it comprises the majority of your time”.

In Frigento, Italy where my wife’s family is from. The views and landscape are beautiful and extremely peaceful. It would be a very hard mountain race, but worth it. If not there, then it would be in one of the Greek islands!

I have had an ankle injury and a serious hand injury in the past. They were part of what inspired me to become a Physical Therapist. I am lucky to have my right hand, which makes it ironic that I chose a sport so grip and running intensive.

Hunter McIntyre because he understands the balance between having fun and putting in serious work. He gives people a hard time, which may rub some the wrong way but it’s only to get the best out of them. I grew up with guys and fellow athletes like him so I get it. He also puts his best into every challenge and doesn’t back down.

I would have continued my training in ChenTaiJiQuan combat art and Gracie Jujitsu. I still look to resume it once I am done with my racing career.

GET YOUR OWN ATHLETE PROFILE

GET YOUR OWN BUSINESS PROFILE ON OBSTACLEEDGE.COM

If you have a product or service that is a good fit for the Obstacle Course Racing (OCR) community, get a business profile on fitlincmedia.com. Our large OCR audience wants to hear from you.