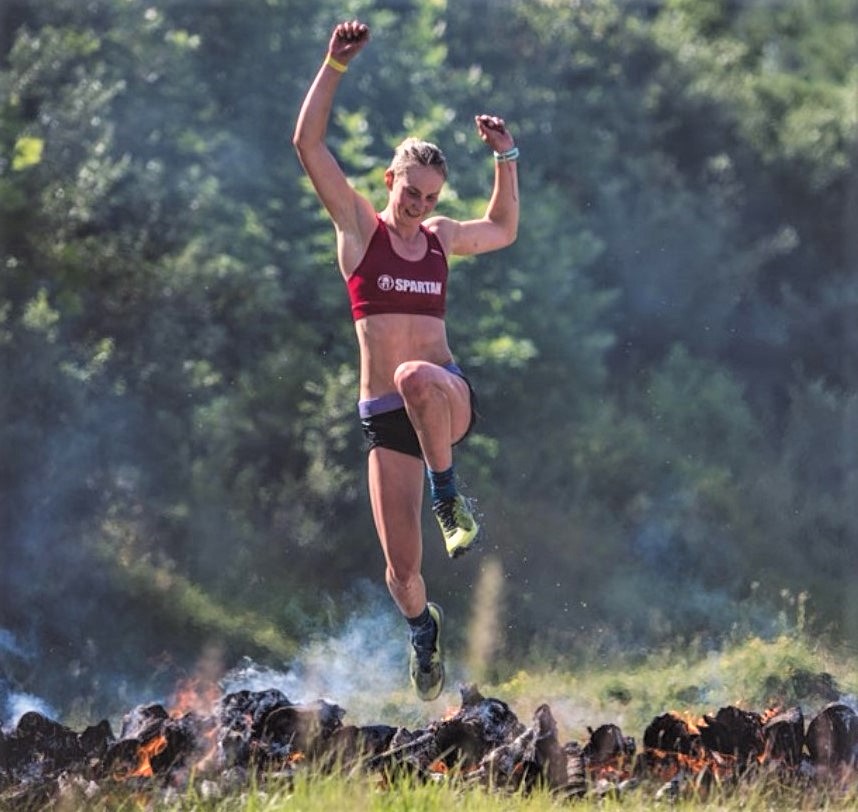 Share a little bit about your background. How did you get into OCR and what keeps you competing today?

I’ve been competing since I was young. I did competitive volleyball all throughout junior and high school, and was on every sports team my school offered. Volleyball and basketball were my main passions. Near the end of high school I began to do some triathlons for fun with my Dad. My whole family (mom, dad, and brother) did one of the first ever Spartans in Calgary, where we had obstacles like balloon blowing and guys trying to take you out with giant marshmallow stick. I remember trying to keep up to my mom going uphill but she was so much faster than me!

I did a few obstacle course races and triathlons here and there for fun with people, but it wasn’t until I decided to do one on my own that I realized I could be pretty good. After University, I realized that the only thing I really wanted to do was train and compete. The past couple years have been a slow build, but I still wasn’t 100% committed to OCR. Last year I was going back and forth between cross triathlon and OCR, trying to decide where I had the most potential. The sport of OCR is just so exciting and is growing so fast, it was impossible not to be pulled in. Last year I won my first Spartan race, and had to see just what I was capable of when I really focused and put all my effort into it.

I train with my family, which is definitely a big reason I got into it and stay motivated to keep pushing. Being able to share these kinds of experiences, from working with my Dad as my run coach, doing crazy workouts together, and doing the races with each other, is so incredible. I love being outside, rolling around in the mud, and pushing myself. I know that I’m only getting started, and that fires me up to keep competing.

What is your favorite race distance/format and why?

It really depends. Each format is so different. The short races are exciting and obstacles are key, but I definitely like the longer races because more can happen. I’m not quite as fast (yet) as some of the other women, so having more ground gives me more time to catch up. Plus then you have more time to be out there in the mud and rain, with all the other crazies. More time to enjoy it.

You set quite an example of what it means to commit and persevere with your performance last weekend at OCRWC in London. You finished with 100% completion and in 7th place with a time of 6 hours 52 minutes and 19 seconds. Share a bit about your experience.

I definitely wasn’t expecting a 7 hour race that’s for sure. I went into it planning to be out there around 2.5 hours, and to make each obstacle first try. Maybe take a couple stabs at one or two, but I had made all the difficult obstacles the day before in the 3K without any problem.

It started out really good. I was close to the lead women, and was loving all the epic mud. The wreck bag crawl was so ridiculous that I was smiling from there on out. Every time we had a running stretch I felt that I was putting a gap between the girls close to me, and felt smooth through the obstacles. The water section was awesome, with the death slide, zipline, and swinger. I got the to the stairway to heaven in good time, but it was very slippery and I could not get a good grip on it. I realized that I would be able to use my arm to chicken wing the entire thing, so committed to that strategy instead and made it up after a few attempts. I was so stoked, because that was where I had failed last year and given up my band.

When I got back to the festival area, I knew that we just had the obstacles from the 3k remaining, which had only taken me 30 minutes the day before. When I got to Valkyrie though, I could not get through it. I knew it was possible because I was making it through the hardest part, I just kept losing it on the descent. So i was probably there for 30-45 minutes. The one benefit was that it was inside so I wasn’t standing out in the freezing rain. I saw person after person giving up their band, but I never really considered it there. My Dad was there with me too, which really helped. It gave me a bit of a distraction and pushed me to make it. After finally making it, I completed the next couple obstacles no problem and had a great little running section through the forest. I walked up to the monkey bars, and figured it would be just like Spartan. Fat and wet bars, no problem. I lost my position on the first try, so gave it another go. And another. And another. This carried on for about 45 minutes. I probably tried at least 20 times. It was incredibly frustrating because I was getting through the hardest part every time, but would fall one bar short. I watched as person after person made it through. I thought that the 4 hour time cap meant you could no longer continue the race, so I figured I would just try until that. Once I realized that you could carry on basically all day, I knew I had to make it through. I was not going to go out on this obstacle, with my Dad still with me, supporting me. He had to start his race pretty soon, so I finally made it through in the knick of time for him to see me make it.

This pattern basically continued for the rest of the race. Any slightly difficult obstacle took me many, many attempts. Force 5. Ninja Rings. Gibbons. Skull Valley. Skitch. It was exhausting. I had been shivering since stairway to heaven, which was one of the hardest things to deal with. I was so mentally drained by the end of the race. But so incredibly happy. This was definitely my proudest moment all year.

Describe one of your more difficult moments during the race and how you made it through.

One of the most difficult moments was Gibbons. You have to place a peg in a hanging hold, and go through five or six holds. I had chicken winged my through in the 3k with no problem, so I didn’t think it would pose any problem. It was the second last difficult rig in the race.

When I got to it, I somehow managed to keep knocking the peg out on my last hold. It was so frustrating because I didn’t understand why it was happening, and my arms were incredibly bruised and sore from all the previous obstacles I had already spent so much time on. Being so close to the end but being unable to do such a seemingly simple obstacle really took it out of me. I was pretty over the race, but I knew that there was no way I could quit after having come so far. At one point I actually sat down on the ground and had some tears come out (which is definitely not something I normally do). I was so exhausted, cold, and frustrated that my emotions were at their limit. I was in so much pain that I had to rest between attempts until my arms stopped burning.

I never questioned my ability to make it through the obstacle, I knew I just had to focus 100%, and be as smooth and controlled as possible. I finally made it through, and knew only one challenging obstacle was between me and that band.

What were you most challenged by at this race? How will you prepare differently next time?

The obstacles were challenging sure, but I was most challenged by my inability to execute the way I know I can. Simply failing so many times and being out there was the hardest part. I need to focus on my mental focus through each obstacle. Improving my grip strength, speed through obstacles, and swinging abilities will be highest in my priorities. I would like to do some more OCR style events, perhaps over in Europe next year. I feel that my other races throughout the year did not prepare me sufficiently for this event, so I will need to be more strategic in choosing my events.

What advice do you have for anyone interested in competing in next year’s OCRWC 15k?

Don’t underestimate it. Once you get to your 60th obstacle, it gets much more difficult. So work on that grip strength and confidence on obstacles. And it’s ok to rest! Above all, run your own race. It doesn’t matter if everyone else is making it look easy, or if everyone else is quitting. You know what you are capable of, and embrace the awesomeness of OCRWC.

How did you feel about the event overall?

It was great. I loved the weather conditions, especially coming from Spartan Worlds and Spartan Whistler where conditions have been similar. I like how much harder it makes the event, and how much more of a mental test it is. The course was a bit flat for my liking so I’m looking forward to there being some mountains next year. And maybe some more heavy carries.

What does a typical training week look like for you?

I usually run 3x a week, with two of those being more speed and tempo focused, and one long run. Typically on trails, because roads are boring. I also usually bike 2-3x a week, with speed work and endurance efforts. Mountain biking is such a great way to train for OCR, and it’s so good for the soul. I also do a couple strength workouts and try to boulder 2x a week.

What does your race schedule look like in 2020? Any specific goals for the year?

I really don’t know yet. I’m waiting for the schedules to be released. I will definitely be doing OCRWC, as well as Spartan Worlds. I’m interested in doing some more adventure style racing, maybe some Crossfit competitions. I get bored easily and want to mix things up a bit. Might even do Spartan Ultra Worlds, an Ironman…we shall see 😉 One of my main goals will be to come back to OCRWC and dominate! Shouldn’t be too hard to improve upon my current time of 7 hours, LOL!